The developments in typeface design, typesetting and printing have always been aimed at the improvement of “quality”. Compared to printing techniques as they existed in the early 15th century we have indeed come a long way. We can digitally output the most perfectly drawn typefaces onto film in resolutions of up to 5000 lines per inch. We can print in offset, in perfect registration, on the smoothest papers and finish it off with layers of varnish, all at a speed that our 15th century forefathers would find baffling. Technically we can create the slickest printing ever, reach the highest possible quality ever. Unfortunately, the results have too often become absolutely boring. The quality of a printed product, the high resolution of its typefaces, the perfect printing are not necessarily what makes for good design or clear communication.

As a reaction to this development, we decided to create a typeface that would add liveliness to the page that has since long been lost using the modern technologies available.

Our typeface would have a high resolution distortion of its digital outlines with lengthy rasterizing times as opposed to most developments in digital type: the unsmooth and slow versus the slick and quick.

Type has always been in flux. Gutenberg started with whole copied pages cut from a single piece of wood. All the characters were hand-cut and no two a’s were the same. And did anyone mind? Gutenberg imitated handwriting because it was the only model of letterforms available at that time. He simply developed a process that was already there, but he succeeded in doing it faster. Only later were the advantages of movable type exploited, when hot metal type casting techniques made it possible to create large quantities of type in a relatively inexpensive fashion. This was also the period when letterforms started taking advantage of this new medium. Bodoni cut serifs so thin that it would have been impossible to produce them out of wood. It has always taken a while for people to realize the potential of a new technology.

Today’s fonts work the way they do because they are still created in a hot metal, movable type kind of way. Their design is based upon the process of punchcutting, which creates a matrix from which an infinite number of identical copies of each letter can be made. Digital type may even “crash” just as hot metal typesetting did. And, ironically, digital type has resulted in a revival of old style and non-lining numerals and even small caps. The usage of type is still based upon the proverbial typecases that were divided into different compartments, each for a different letter. When a certain letter is needed, it is put in line with the others to make words and sentences. Today the typecase is replaced by a font and a digital printer.

Through our experience with traditional typesetting methods, we have come to expect that the individual letterforms of a particular typeface should always look the same. This notion is the result of a technical process, not the other way round. However, there is no technical reason for making a digital letter the same every time it is printed. It is possible to calculate every point and every curve differently each time the letter is generated by slightly moving the points that define a character in various “random” directions. We discovered that it was possible to create a font featuring these characteristics in PostScript; our result was Beowolf, the first “RandomFont” typeface of its kind. [Actually, Knuth got there first and he was nice about it.]

Random technology, which is what we call the programming that is involved, is about letting the rasterizer behave randomly within the boundaries of legibility. Instead of recreating a fixed outline or bitmap, the Randomfont redefines its outlines every time they are called for. Thus, each character will be different each time it is printed. All the points that define the outline of any character will be nudged in a random direction. The distance moved depends on the parameters. For instance, Beowolf 21 has a little deviation, Beowolf 22 has a noticable wrinkle and Beowolf 23 is definitely mad.

What is interesting about this typeface is that the deviations in the individual letterforms create an overall unity and the liveliness of the page that we were after is accomplished. We also discovered an interesting side effect when creating color separations for four color printing. Since the printer (Linotronic in this case) generates different outlines each time it prints a particular letter, the color separation will result in four different non-matching films. The resulting letterform in print will be outlined in bright colors.

While working on Randomfont we became aware that if we treated typefaces as computer data, instead of fixed letterforms, we could create some very bizarre systems. One idea was to connect a font file to a self copying moving mechanism to create a virus font; a self distributing typeface: a great way for young and ambitious type designers to get their typefaces known and used. No type manufacturer would be able to compete with that kind of immediate proliferation. Or we could change typographic awareness of computer users around the world by creating a font virus that would transform every Helvetica into something much more desirable — the Post-modern typographer’s revenge. Virowolves that travel around the world in a single day, with typedesigners getting paid by buying network shares. Or we could hand out our fonts at conferences and meetings, but after a while the files will turn sour just like milk. A perfectly good font would turn random over time. A great way to force people to eventually buy a legitimate copy. And you better hurry, or the virus font will affect your other fonts as well!

We could release a typeface that deteriorates over time, slowly turning into a Beowolf-like face, scaring the hell out of its users. We could create letters that wear out through frequent use, combined with a feature that uses up certain often used letters. You want real letterpress quality? You can get it! How about a font that adds typos? Link a number of typos to a particular time of the day and simulate an erratic (human) typesetter, or a font that does not work overtime.

If we put more data into our typefaces we can have some very intelligent fonts. Some applications could be quite practical. For instance the data could include the information to create automatic inktraps that would switch on or off automatically, or as specified by the user, depending on the size of the type or printing technique used. A font would modify its outline when it is to be printed in offset, or shown on TV or screened on wood, or whatever. Or a typeface could research weather data, in particular the amount of direct sunlight on the spot where it will be printed, and modify itself to the best possible contrast.

The idea of Randomfont can be applied elsewhere too. Why should a letterhead always be the same? It can be slightly different each day. If you print your correspondence or invoices on a LaserWriter, you can have a randomlogo, a logo that changes itself, moves around the page or tells something interesting about your company, the person you are writing or the nature of the letter. The dynamic logo can be much more informative than its fixed alternative.

For years graphic designers, especially those who subscribe to the ideas and philosophies of Swiss design or modernism, have argued that logos and typefaces should appear consistent to establish recognition. We don’t think that this is necessary. Creating a randomlogo for a company, with letterheads and forms on which the logo would move around and change, does not necessarily decrease recognisability. Recognition does not come from simple repetition of the same form but is something much more intelligent, something that happens in our minds. When you hear somebody’s voice on the phone and he or she has a cold, you can still recognise who is talking. We can recognise handwriting, and even decipher how quickly a note was written and sometimes pick up on the state of mind the person was in when writing the note. Randomness and change can add new dimensions to printwork.

Randomness within typography is not a revolutionary idea either. Typographers have always had to deal with randomness because type has always lacked standardization and consistency. One example is the measurement of type. With hot metal type everybody measured the body size of a typeface. With phototype and digital type there is no body to be measured. Some people like to measure the x-height, others the cap-height. Even the computer industry has added to the confusion. Software developers in different countries have each taken their national typographic standards and type measurement units and have written programs using their respective systems. This becomes a problem when for instance software written by an American developer is sold in Europe and the user must switch to the American measurement system.

There are software programs that will interpret between the various existing measurement systems, but the conversions are performed internally. So two centimeters will inevitable output as 2.0001 or 1.9999 centimeters, it never works precisely. Randomness will always exist. There is definitely not going to be a universal set of standards for type and typography. Maybe randomness is an inevitable result of human behaviour. Gutenberg’s letters came out looking slightly different each time they were printed. Letters wore out, some got damaged, the impression onto the paper differed. However, overall the printed results had a vibrant and human quality. At some point during the developement of type and typography, the graphic design industry decided that is was necessary to improve upon the “quality” of printing and type. In the process due to economic and commercial considerations, much vitality was lost. We believe that the computer, although considered by many to be cold and impersonal, can bring back some of these lost qualities. Randomfont is our contribution to this idea. 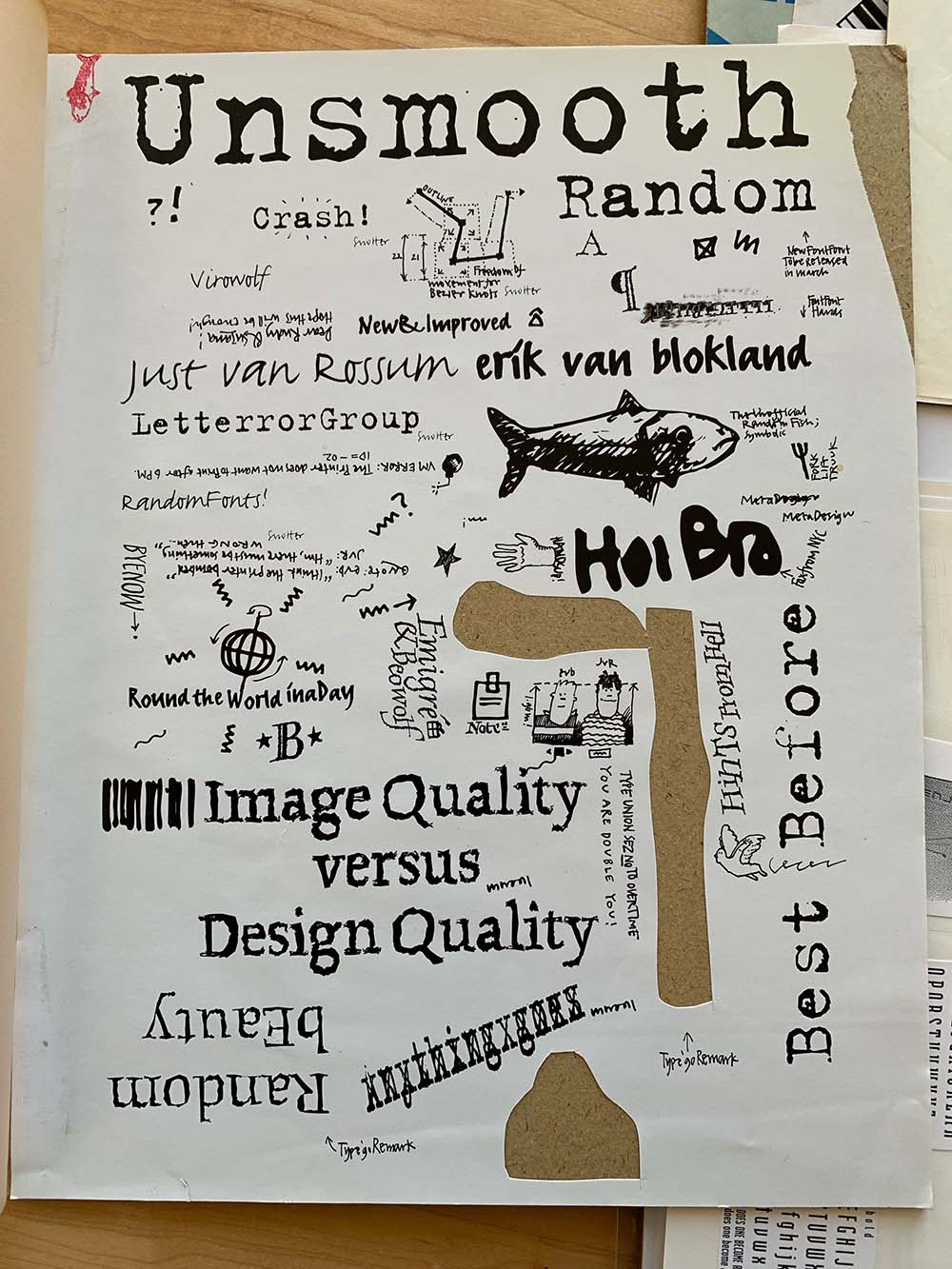 Photo by Dan Rhatigan from the LetterArchive. This is a sheet of images, drawings and type as a cut out sheet for illustrations for the Emigré article on RandomFonts.