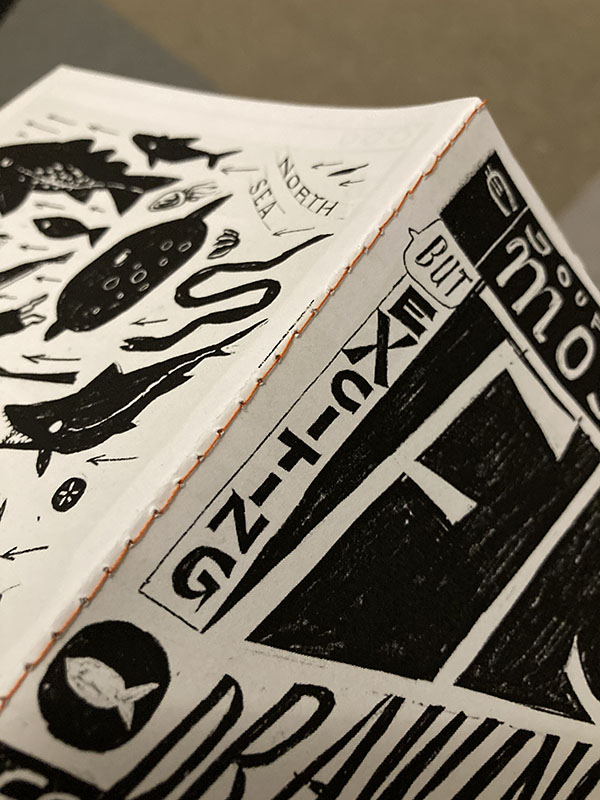 Closeup of the informal stitching of the fishbook. New editions may sport different colors.

Fishbook: Various drawings of fish, but not the same fish, but printed

So after drawing bunches of fish (you may have seen them on instagram) I wanted to make a couple of printed things. This is the first!

Shall we call it a book? No. It’s a 16 page “zine”. Black and white on unnecessarily rough and recycled paper. Don’t get your hopes up. But the fish are nice and the letters are amusing. And when I write “letters” I mean the lettering. There is no fish related correspondence in the publication. Just so we get that straight. The whole thing is a fish themed fishing expedition. Need some amusing letters? Give me a call.

Some of the fish presented below appear in the fishbook. But certainly not all of them. Actually most of them don’t. And did I mention it was not in color? Good.

So while stocks last, and provided you read all the disclaimerism above: order your fishbook here: reasonable prices with shipping included, for now. 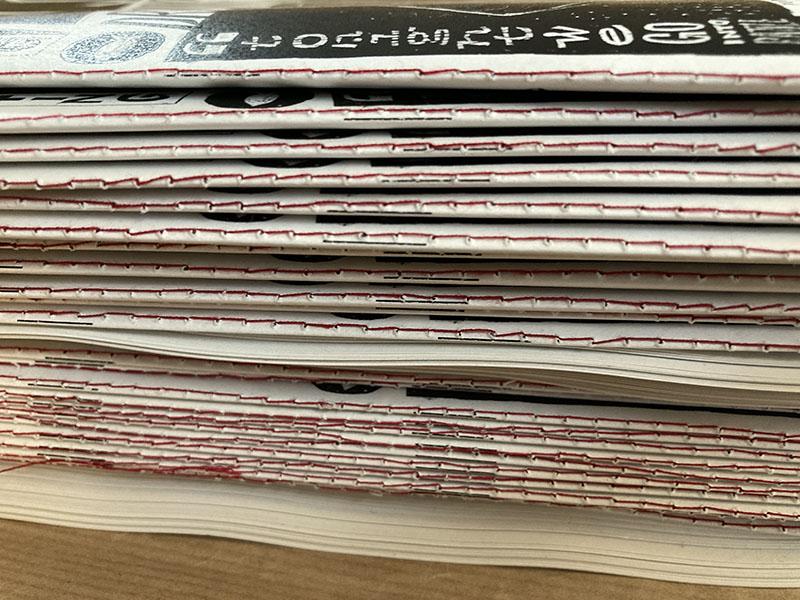 The letters in the words RAW are rendered in a stylized way. The bifurcation of the stems was presumably added as an afterthought to break some of the repetition. What are we to think of the fish? An encrypted religious reference? None of the other works in this series hint that way so we can safely ignore. Could the fish be seen as a cartoon character? It has an expressive face and appears to nibble at one of the letters. In the German typographic vocabulary a “zwiebelfisch” is a typo, perhaps the fish is editing the text. It is, without doubt, a nice fish that fills the space to the right of the RAW words. 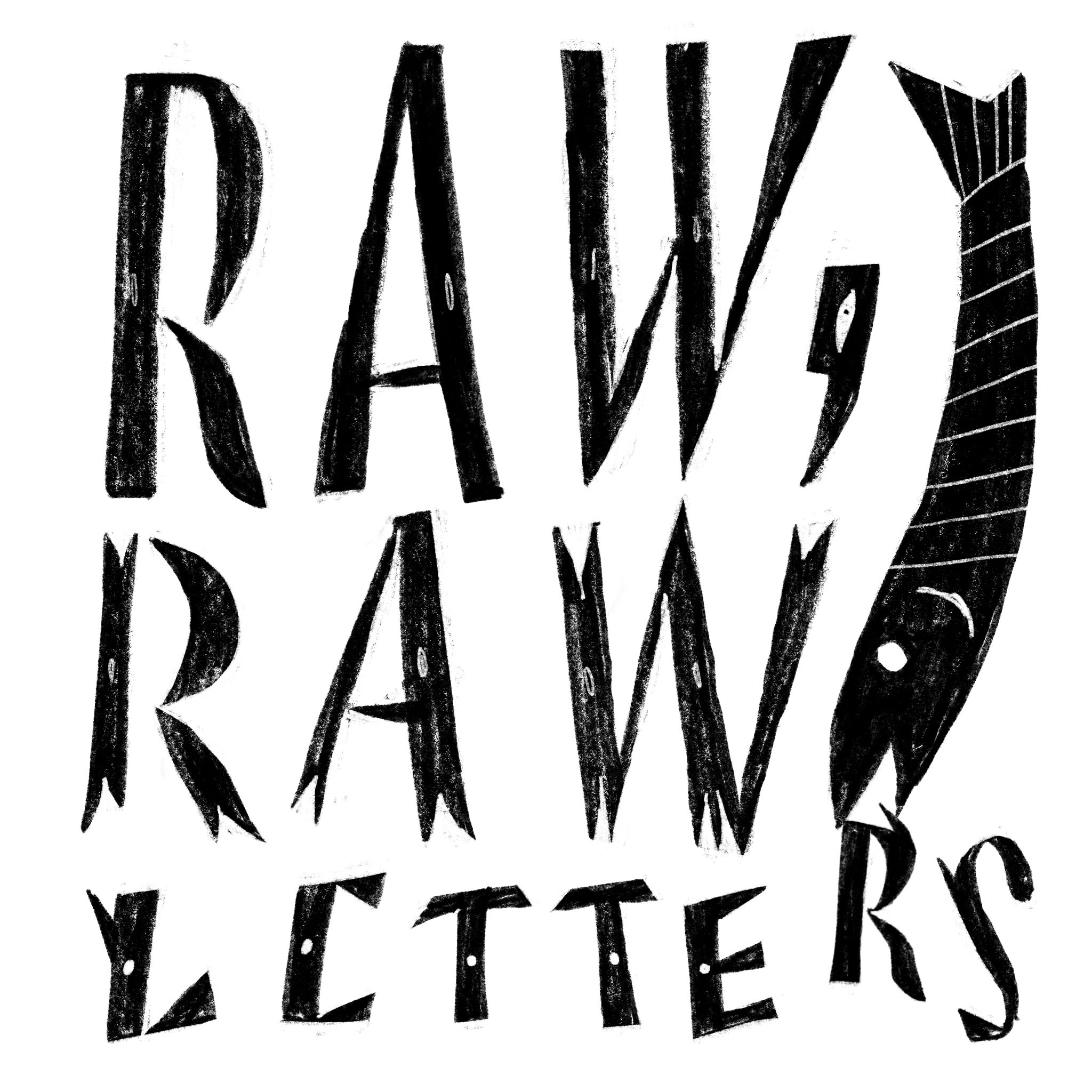 They can have nice shapes, fish, right? They easily adapt to different levels of detail. Add some letters and it is a sign for a shop, or some other fish related enterprise. 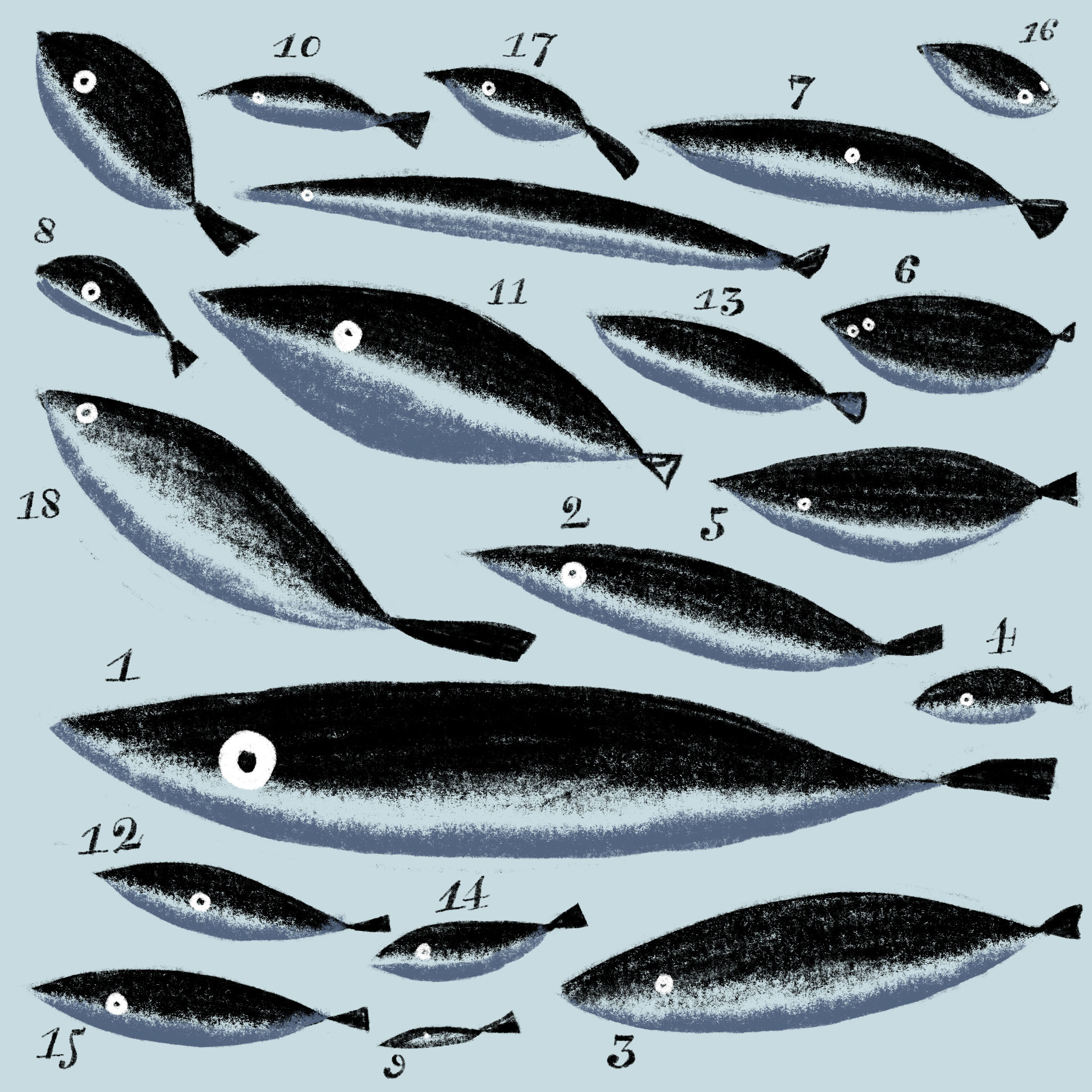 Many fish with numbers. A diagram, a method of sorting or categorisation. Like pokémon perhaps. During a brief moment of interest on Instagram the fish labeled number 6 was particularly popular. It does look a bit confused, or lost. THe numner four fish is kind of cute. 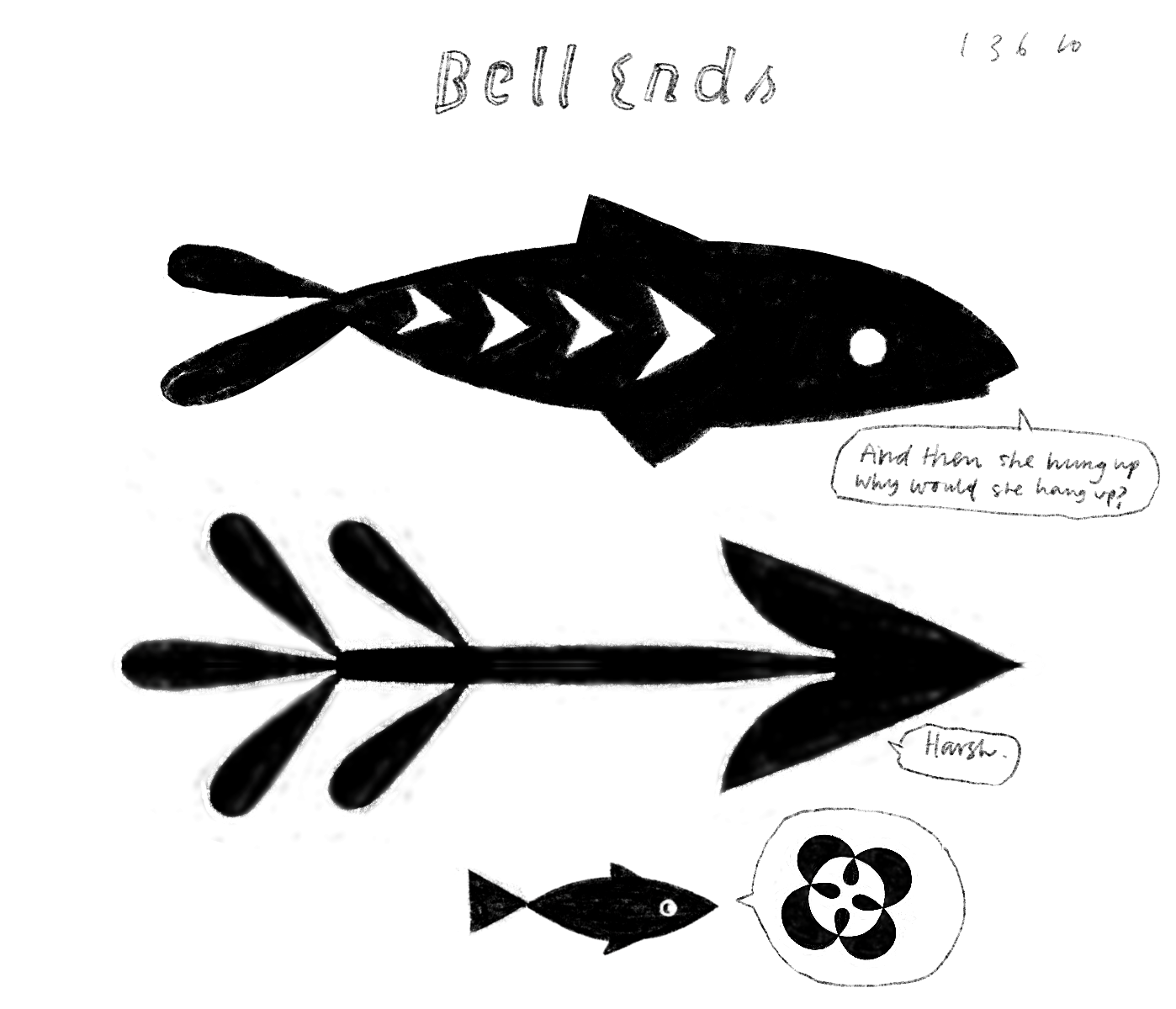 This time small, scalable fish of undetermined species and an arrow that probably would have liked to be a fish. The bigger fish appears to be in a conversation with the arrow. Text balloons give speech and words to shapes that would otherwise remained quiet. The dialog is banal, old friends or colleagues on a commute. Imagine talking fish! Imagine fish talking about banal subjects! The small fish on the other hand has expressed an abstract shape we have seen posted before. Unpublished, but with some real territorial claims on the fish. 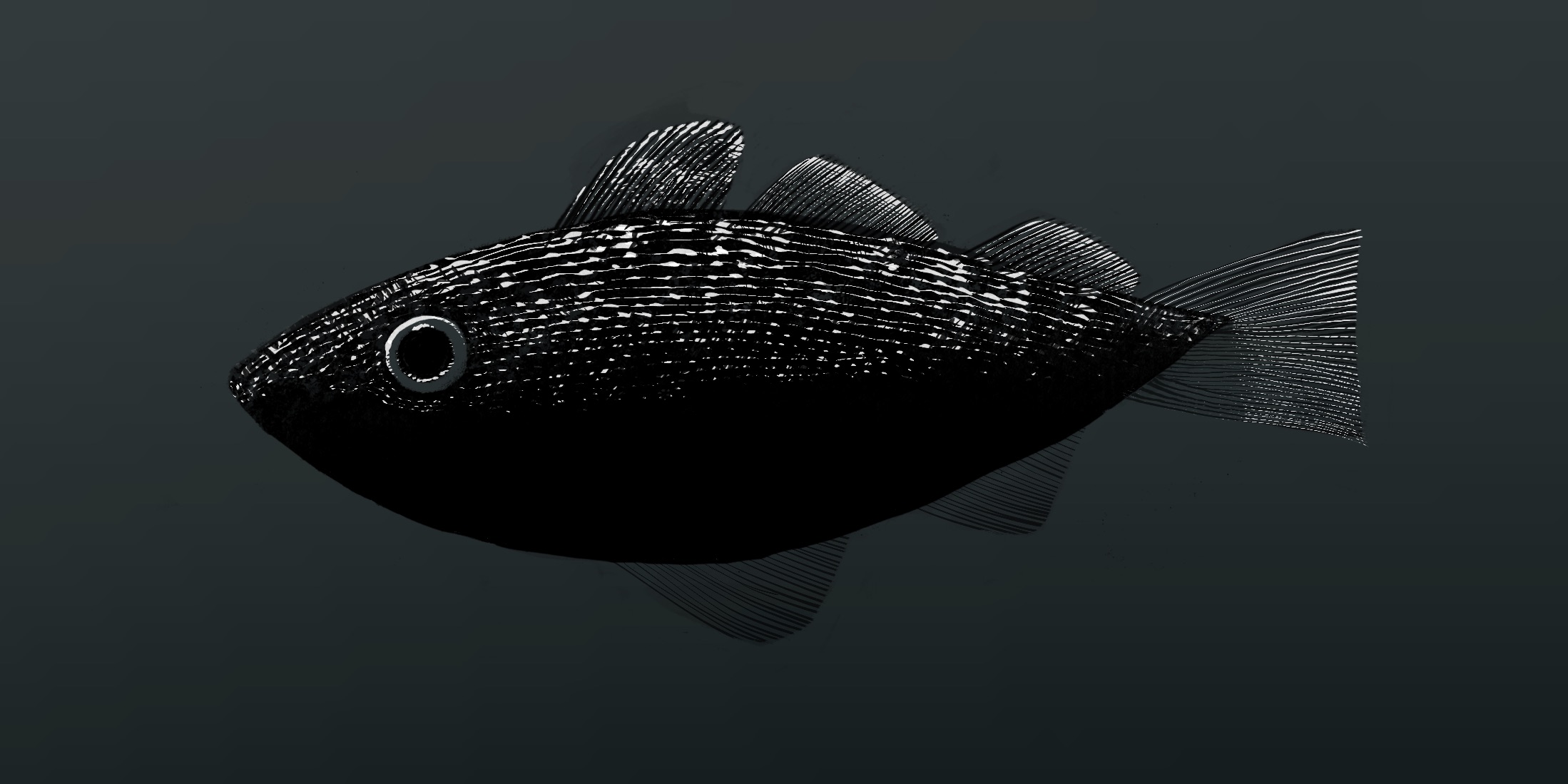 Dark fish in dark water. Light cast from above: is it in an aquarium maybe? Does it know where it is going? Is it aware of the dangers lurking in the darkness?